I believe that if you post something offensive or repulsive you should be kick off of extra curricular activities. If you were to go onto twitter and type something hurtful or you were to go on Instagram leave a mean comment, you are insulting that person. You are making them feel bad about themselves. What if you were to go onto Snapchat and post a picture that says I hate so and so, you are hurting them. Many don´t realize this like look at MS Rubino, she said,¨After today, I am thinking the beach sounds like a wonderful idea for my 5th graders.¨¨I HATE THEIR GUTS! They are all the devils spawns!¨ She said this after a kid drowned in the Atlantic Ocean, I learned this from an articular by Michael Gonchar. What if you just wrote something threatening towards someone. That is the same as saying it in person but you letting the whole world know your feelings. So over all I think you should be able to get punished for social media posts.

Alexander had many “accomplishments” like helping Thomas Jefferson in getting in-rolled as president, establishing the first bank of America, writings thousands of pages and he was pt on the ten dollar bill. Hamilton team up with James Madison and John Jay to write the federalist papers. At the start they planed on write 25 papers. In the end they wrote 85. John jay got sick after writing 5, James Madison wrote 29 and Hamilton wrote the other 51!

Hamilton has done some bad things like he had an affair, I won’t go into detail. But overall Alexander Hamilton was a good person who help build America. So what do you think of Hamilton, live your answers in the comments below. When it comes to the 20% project, my group has “kind of failed”. We have done some things like we made a script for a video and we started making a poster, but we have temporarily stopped making the poster because we’re making the video now. But on the bad side we wanted to be done with the posters already and we wanted to finish the Video by Dec. 1 which is today. Also are mentor has not responded besides saying we have seen your request and we will think about it. If I could improve something at my school it would be decreasing the amount of Homework. I would do this because homework is time consuming, which takes family time/ relaxing time away. Another reason is kids remember VERY little of the the information that is on the homework, even studies back this up.

Why kids don’t remember the information on there homework

We are trying to teach kids the pros of being different.

When it come to are 20% project, I feel stressed because we are behind on our deadlines; yeah, we are already behind. I feel exited because the out come should be life changing. I´m also a little nervous because we are trying make a completion of videos with people saying be yourself.

I briefly mentioned our deadlines in the last paragraph. In November we have to make posters and make a video. In the next few months we are going to make another video and try to convene kids to be different or “weird”. To accomplish these goals, we will have to contact a few people and try to make the community except this idea.

At the mall Felix saw a promotion for a play, this play was Hamilton.

Felix saw the prices of the tickets, never less he still bought $750 tickets.

He also had never been to a play.

He got to the play and the play started, but he didn’t know how to act a theater.

In the middle of the play Felix stood up and started placing, when they told him to stop he punched someone.

I want you guys to finish the story, leave of comment on how you think it should end. Show time. Show time, everyone. Its time for the first showing of Hamilton. Ladies and gentle men. We have spent 7 years making this musical. This is a musical is about Alexander Hamilton, one of our fondling fathers, whom is also on the ten dollar bill. There is only singing in this musical, so lets begin.

But you are not aloud to talk at a musical… What do you think happened next? So I have been doing some research on attribution. I have learned that attributing someone is like honoring them.

This info really does help because this means I can use others stuff as long as I say they did it. I still need to  know what is too much attribution. I’m think I have a good idea of how much attribution to have.

There once was a pumpkin

who mistreated his friend.

He would never be nice,

he also would criticize.

But one day he was so mean

that his friends put a light into him

and carved his face out. 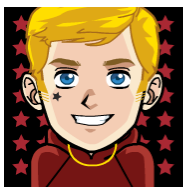 I think represents me because. My avatar has the same hair as me, he is smiling and he has blue eyes. He also just looks happy and chill. The background has stars because I like stars and because the American flag has stars (obviously I´m American.)